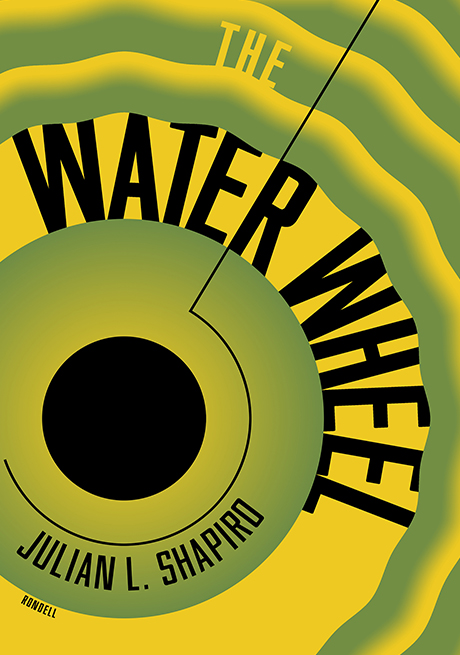 First ever reissue of the 1933 semi-autobiographical debut novel by Julian L. Shapiro (1904–2003). With a new introduction by Jack Mearns.

From the original edition's dust jacket:

"In form, The Water Wheel has no counterpart in American letters. It deliberately avoids the traditional, but its objectives are always clarity and simplicity. The many technical and typographical innovations are designed to suit the subject matter, and are not fake-modern tricks."

"I can't say that I have ever seen better work. It is really written, it moves, it has the quality of a novel. The story as a story bites in—with a use of very common scenes—it becomes serious, a matter of serious concern to anyone who can think and feel. It is excellent."
— William Carlos Williams

"I personally regard Shapiro's novel as the sort of thing that has to come after Joyce, Stein and Surrealism. In other words, it is chronologically right. But this is far from being all. It is as fine and sensitive at times—if the word were not so utterly damned, I'd say 'as beautiful'—as Virginia Woolf. ... In addition, Shapiro is a highly conscious and finished craftsman, which is to say that he is always exceedingly readable."
— Samuel Putnam

In 1935, Shapiro adopted the name of The Water Wheel's protagonist, John Sanford, in hopes that, in a time of rising antisemitism in the U.S., a gentile name would aid book sales. In his earlier novels, he was noted for blending experimental techniques with realism. He was described as "perhaps the most outstanding neglected novelist," by The Cambridge Companion to Jewish American Literature.

While Sanford's later novels were well received — especially The Old Man's Place (1935), Seventy Times Seven (1939), and his masterpiece The People from Heaven (1943) — The Water Wheel was panned by reviewers when it was originally published. The Miami Herald was appalled by the sordidness of the novel, tame by today's standards. In a review titled "Sex, Sin, Slime," they wrote, "This is a first novel. It should be the last." and "It is a pity that God's green trees must be sacrificed to provide paper for printing this stuff." The New York Times was a little kinder. While admiring the author's flair and "originality of language," they dismissed the work as "sensitive, neurotic workings of the Sanford mind, with its defensive egotism and pleasure in self-torment—a study in the immature egotist and his inferiority sense." The review concluded, "Mr. Shapiro, with his verbal brilliance, will do better work in a more objective novel."

Sanford wrote half of his books after he was 80. He published a five-volume autobiography, for which he received a PEN Award and the Los Angeles Times Lifetime Achievement Award. He left three unpublished novels and was writing up until a month before his death at 98.

This edition includes a new introduction by Jack Mearns, professor of psychology at California State University and administrator of Sanford's literary estate.